President Uhuru Kenyatta on Saturday unveiled the new banknotes which bare an image of the iconic Kenyatta International Convention Centre (KICC) and Mzee Kenyatta’s statue found in the middle of the fountain.

Together with Central Bank of Kenya(CBK) Governor, Dr. Patrick Njoroge, Uhuru unveiled the notes at Narok stadium during the Madaraka Day celebrations. 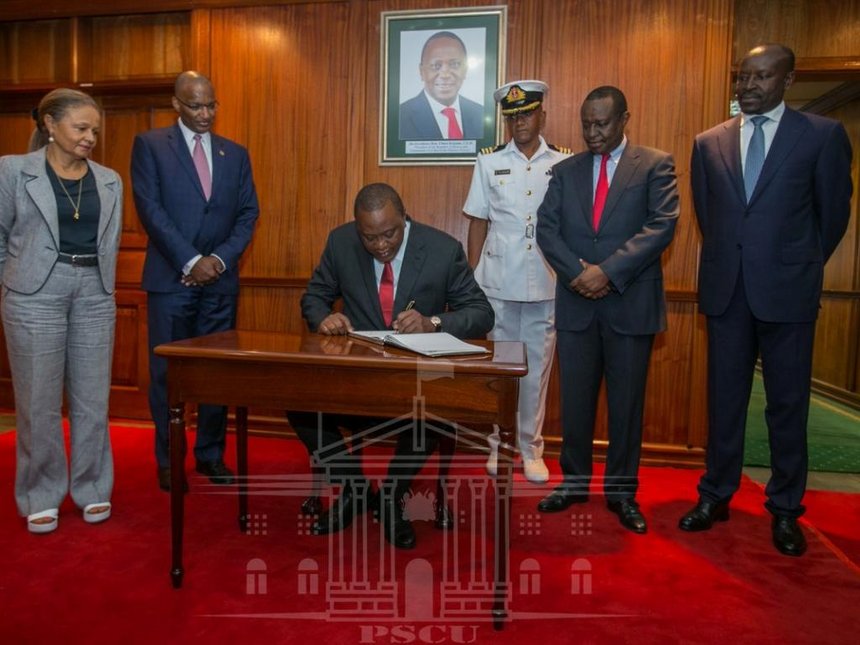 During the unveiling, Dr Njoroge said the new notes will circulate alongside the old ones but put a deadline for the circulation of old Sh1,000 notes which bears the images of the founding president Jomo Kenyatta.

“We have assessed the grave concern that our large bank notes, particularly the older Sh1,000 series, are being used for illicit financial flaws in Kenya and also other countries in the region.”

“To deal with those concerns, all the older Sh1,000 series shall be withdrawn by a Gazette Notice dated May 31, 2019, all persons have until October 1, 2019 to exchange those notes, after which the older Sh1,000 bank notes will cease to be legal tender,”  Njoroge said.

But why the haste to change into the new notes? Analysts have pierced together the probable reasons and settled on ‘Corruption’ fights as the main reason. Uhuru’s government made the move after realizing that corrupt men in both national and county governments are hiding billions in Sh 1000 notes in the houses.

Talk has been rife that Deputy President Wiliam Ruto, politicians and other businessmen have been hiding millions of shillings in their houses avoiding banks are the target in the 1st October withdrawal deadline of the old sh1,000 note.

The new directive that the old sh1, 000 notes will be irrelevant by 1st October 2019 in the next four months has caught them by surprise. According to the directive those who have been hiding millions in the houses in the form of sh1,000 have to submit the money by 1st August this year.

Here is a list of men and women who are being targeted by Uhuru’s Sh 100o note withdrawal.

It remains to be seen how the alleged targeted individuals and institutions will take heed to the directive and how much money will they present to the Banks for exchange.