Of all the many stories told about the life of President Daniel arap Moi, none is more egregious than that which alleged he was implicated in the murder of Dr Robert Ouko.

Of this I am quite certain: it wasn’t Moi.

The story grew up that Ouko was seen as a threat to his president, or that he was about to reveal high-level corruption in Moi’s administration, or again that there had been ‘some sort of row’ between the president and his minister during a trip to Washington DC and that one or more of these theories may have been a motive for Moi to have Ouko assassinated.

It’s provably utter rubbish- there’s hardly a grain of truth in any of it but then the truth and little things like facts have rarely been allowed to get in the way of telling the story of Ouko’s murder.

Moi knew he could rely on the articulate and loyal Ouko to defend him and his government.

There’s also the slight matter that President Moi called in New Scotland Yard to investigate Ouko’s murder, a surely illogical and reckless act of folly if he himself was involved in the murder.

Moi’s calling in New Scotland Yard is often explained away that he did so after coming under increasing pressure over several days, if not weeks: not so.

Moi requested help from the British police almost immediately Ouko’s body was found on Friday, February 16, 1990. Diplomatic telexes show that an ‘urgent request’ to the British authorities for assistance was made ‘over the weekend’ of the 17th and 18th.

On February 21, five days after Ouko’s body had been found, a team of New Scotland Yard detectives led by Superintendent John Troon, accompanied by Dr Iain West, a forensic pathologist, arrived in Nairobi.

On August 28, Troon completed his ‘Final Report’ into the murder of Ouko. Although it did not ‘in any way’ implicate Moi, Troon’s theories did form the basis for later allegations against him. 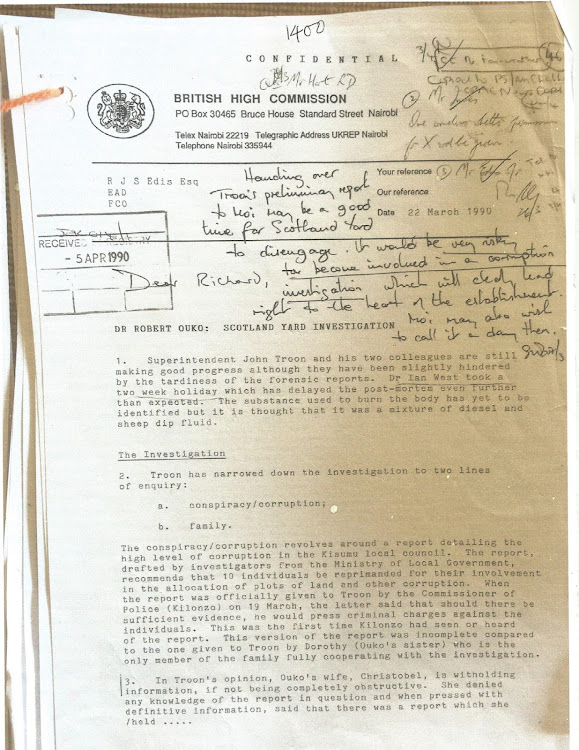 KISUMU CORRUPTION AND THE WASHINGTON TRIP

Troon came up with two theories as to a possible motive for Ouko’s murder.

One was an allegation of corruption over the rehabilitation of a molasses plant in Kisumu, the other that there had been ‘a row of some sort’ during a presidential trip to Washington DC following a supposed private meeting between Ouko and President George H.W. Bush after Moi had been snubbed by the US leader.

The Kisumu molasses corruption theory arose principally from the testimony of a Swiss-German woman, one Marianne Briner-Mattern, and to a lesser extent her Italian ‘partner’ Domenico Airaghi, ostensibly directors of BAK International, a company brought in by Ouko to raise funds in Italy to rehabilitate a molasses plant in Ouko’s constituency.

Briner-Mattern testified that ‘kickbacks’ were demanded for senior Kenyan politicians to allow the project to go forward, with a percentage to be passed on to Moi, and that Ouko was writing a report into the Kisumu molasses plant corruption which he planned to hand to the President.

Troon accepted Briner-Mattern and Airaghi’s story because he said in his ‘assessment,’ they were ‘truthful and honest witnesses’ under a ‘reputable company’, although he acknowledged that their testimony was ‘tenuous’ and ‘circumstantial’.

It transpired that Airaghi was a convicted criminal found guilty by an Italian court (Milan, March 14, 1987) on charges of attempted extortion. The principal witness in his defence was none other than Marianne Briner-Marten.

Nor was their company BAK ‘reputable’. It never traded, nor did it legally exist until it was registered as ‘BAK Group Marianne-Briner and Partner’ on February 13, 1990 – the day that Ouko was murdered, whereupon Briner-Mattern’s claim for $150,000 from the Kenyan government for alleged losses incurred over the molasses project increased to just under $6 million.

No ‘corruption report’ was ever found none other than Briner-Mattern ever said that there was one.

Troon admitted that the Washington trip theory was based on the hearsay testimony of Ouko’s brother Barrack Mbajah and their sister Dorothy Randiak who claimed they had heard of a row. Neither was on the trip and their testimony could not be corroborated.

By the time of a Parliamentary Select Committee’s ‘investigation’ 15 years later, the story had been greatly embellished.

Now it ran that a furious Moi made Ouko return from Washington on a different flight to the rest of the Kenyan delegation, that his passport was then confiscated, he was sacked, his security removed, his driver dismissed, Ouko himself banished to his farmhouse at Koru and later taken to State House in Nakuru, beaten, shot in front of Moi and his body dumped back at the foot of Got Alila, just over 2km from his Koru home.

President Bush’s official diary, official archives and reliable testimony prove that there was no meeting between Bush and Ouko. Indeed, at the time Mbajah claimed the meeting took place Bush wasn’t even in Washington D.C.

Ouko then returned to Nairobi with the Kenyan delegation as multiple eye witness testimonies, photographs and news media film footage prove beyond any doubt.

Ouko’s passport was not confiscated. His office staff said they had it in preparation for his next trip to The Gambia. Mrs Ouko later handed it to the British police.

Ouko was not ‘sacked’ or ‘banished’. He continued to give instructions to his office staff and making a speech in Kisumu. Nor were his driver and bodyguard removed – they travelled with the minister to Koru.

As for the ‘shot in State House’ theory, Dr West’s forensic evidence together with the finding of a bullet mark at the scene proved that Ouko had been shot where his body was found and eye witness testimony proved that had to have been on the morning of February 13.

Ouko could not have been ‘shot at State House’.

President Moi may not have been an innocent man but he was entirely innocent of murdering Ouko.

Martin Minns produced the documentary Murder at Got Alila: Who killed Dr Robert Ouko and why?

This is why Coronavirus isn’t spreading in Africa, according to experts

Serie A Suspended as Italy Ceases All Sport Due to Coronavirus