Raila’s ally in Trouble after dismissing BBI in Nyanza

Speaking during the burial of Mzee Tom Cornel Wanyande in West Ugenya, Ochieng’ who was booed and heckled by mourners pointed out that when handshake took place and gave birth to BBI it was between two people but Kenyans should support what they do not understand and called for mass rejection of BBI in Ugenya.

The area MP’s utterances which shocked mourners were met with boos and heckling which forced him to cut short his speech and matters got worse when some intoxicated youth started baying for his blood and the visibly shaken MP had to be sneaked out of the venue through the fence by bouncers led by former West Ugenya politician Antoine Ochilo even before the burial ceremony ended.

Mourners who spoke to Weekly Citizen called on Ochieng’ to slow down adding that after winning the by-election in Ugenya on a MDG ticket when he beat ODM’s Chris Karan, he has grown horns and become too disrespectful to ODM party and Raila yet it is ODM which forced him on Ugenya voters during 2013 general elections after he lost to Karan in the party primaries which saw him go to parliament for the first time. 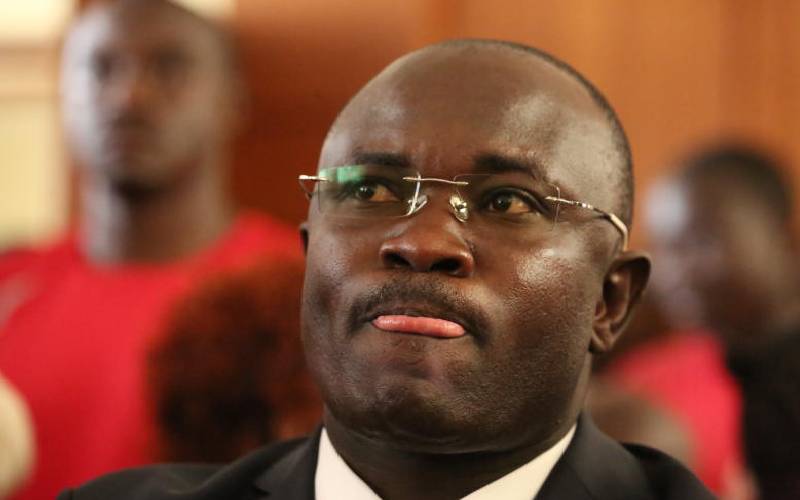 Barely had the dust settled after Ochieng’ dismissed BBI, Raila and his brigade led by Siaya senator James Orengo stormed Ugenya and claimed that BBI is the best thing ever to have happened to this country since it will unite the country, eradicate poverty, end illiteracy and bring peace after elections which has always seen post-election violence erupt in the country.

Speaking amid cheers and ululations during the burial who was a senior police officer during Jomo Kenyatta era, Raila told off the area MP for misleading Ugenya people as regards the BBI adding that at the stage BBI has reached there was no point spending more time reading it since views have already been collected throughout the country and consultations are ongoing.

He said by March, consultations will have ended and a million signatures will be collected then a Bill will be drafted to set the stage for a referendum. BBI, he said, will end the culture of politicians carrying stolen money in sacks to dish out to Kenyans who end up cheering and clapping for them not knowing they are being given stolen money.

Siaya senator hit out at Ochieng’ and other politicians who are always out to oppose everything being done for the betterment of this country. Speaking on the sidelines, former Ugenya MP Chris Karan said BBI is unstoppable.

Rashid Echesa sues DCI over mishandling of his properties

KETRACO partners with universities to bridge engineering skills among vulnerable…