According to a letter published in the media, the 45-year-old, popularly known as ‘Chairman Wontumi’ in his homeland, has made a bid of $3.1 billion for the English club which is valued at £3 billion by current owner Roman Abramovich.

Chelsea have been put on the market in the wake of controversies surrounding Russian owner Abramovich following his country’s recent invasion of Ukraine.

When asked via TV3 Ghana if his proposed bid is a joke, Wontumi was adamant about the seriousness of his interest in the London club.

“Once they conclude, my finance is yes, and I will sit with my team to discuss it.”

Regarding the submission of an official bid to own Chelsea, Wontumi answered, “Of course, yes. My lawyer is there now so let’s just wait. The money is there, I live in a palace, not a mansion.

“We are like 15 people who have shown interest to buy the club, there are Americans, Turkish but I’m the only African.”

The letter confirming Boasiako’s interest in Chelsea reads as follows.

“I am informed of the intention by the owner of your reputable club, Mr Roman Abramovich, to put up Chelsea Football Club for sale,” the letter signed by Andy Owusu, office manager of the Wontumi Group of Companies, stated.

“I am by this letter writing to officially declare my intention for the purchase of same.

“My official bid is in the range of three-point one billion dollars ($3.1B).

“My legal team and transactional advisors are ready to engage in negotiations.” 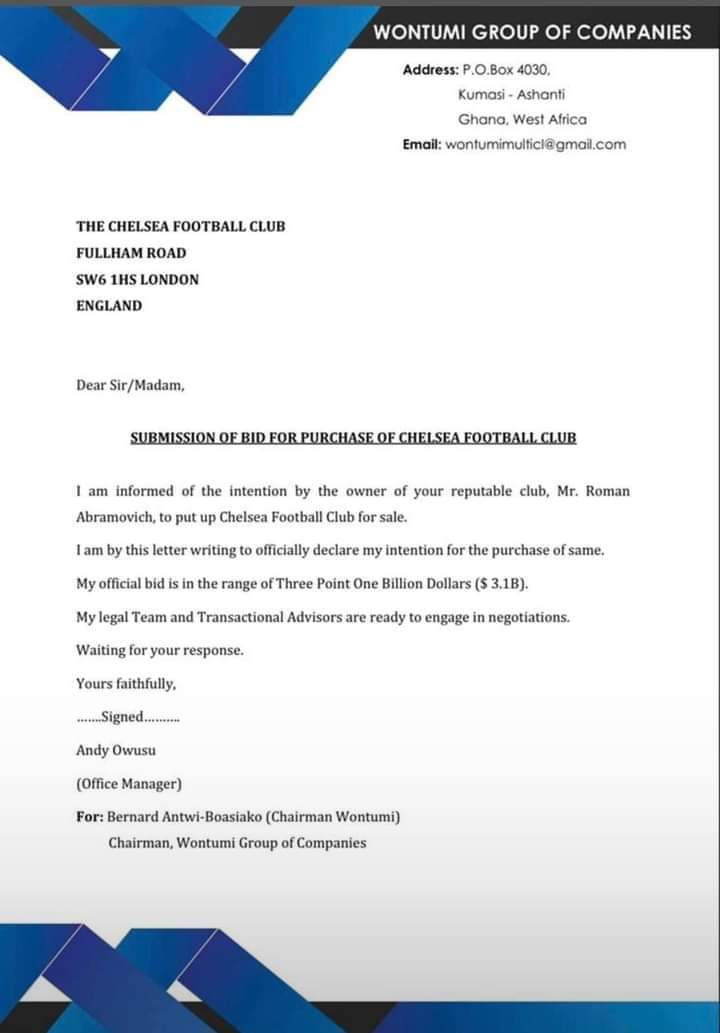 Wontumi is famous in Ghana for his status as chairman for the incumbent National New Patriotic Party and as one of Ghana’s wealthiest men.

He is well known for his ownership of a gold mine and radio and television channels.

Beyond his audacious bid, Chairman Wontumi has set sights on a sensational attempt to sign both Manchester United striker Cristiano Ronaldo and Paris Saint-German attacker Lionel Messi for Chelsea should he be successful in taking over Chelsea.

“I want to go and buy Chelsea Football Club. I am interested in it. Those who buy clubs are not footballers, but business people,” the Ghanaian is quoted as saying to Wontumi FM, as reported by The Sun.

“I am also a businessman. I’m into gold mining. Why can’t we buy the club? I want to join the bidding.

“If I become the owner, I want the Brazilian player at Real Madrid, Vinicius Jr – and to sell off Romelu Lukaku. I will speak with Manchester United to see if I can also buy Cristiano Ronaldo for Chelsea. I’d also look at signing Lionel Messi.

“Once they conclude, my finance is yes, and I will sit with my team to discuss it.”

“Roman Abramovich has done his best. It is now time for him to support a Ghanaian or an African to buy Chelsea.”

Internationally based billionaires Todd Boehly, Hansjorg Wyss, Jamie Reuben and Nick Candy are among the candidates in the running for Chelsea’s ownership.

ALSO READ:  VIDEO: Why Orengo’s chopper was stoned by rowdy youth in Siaya